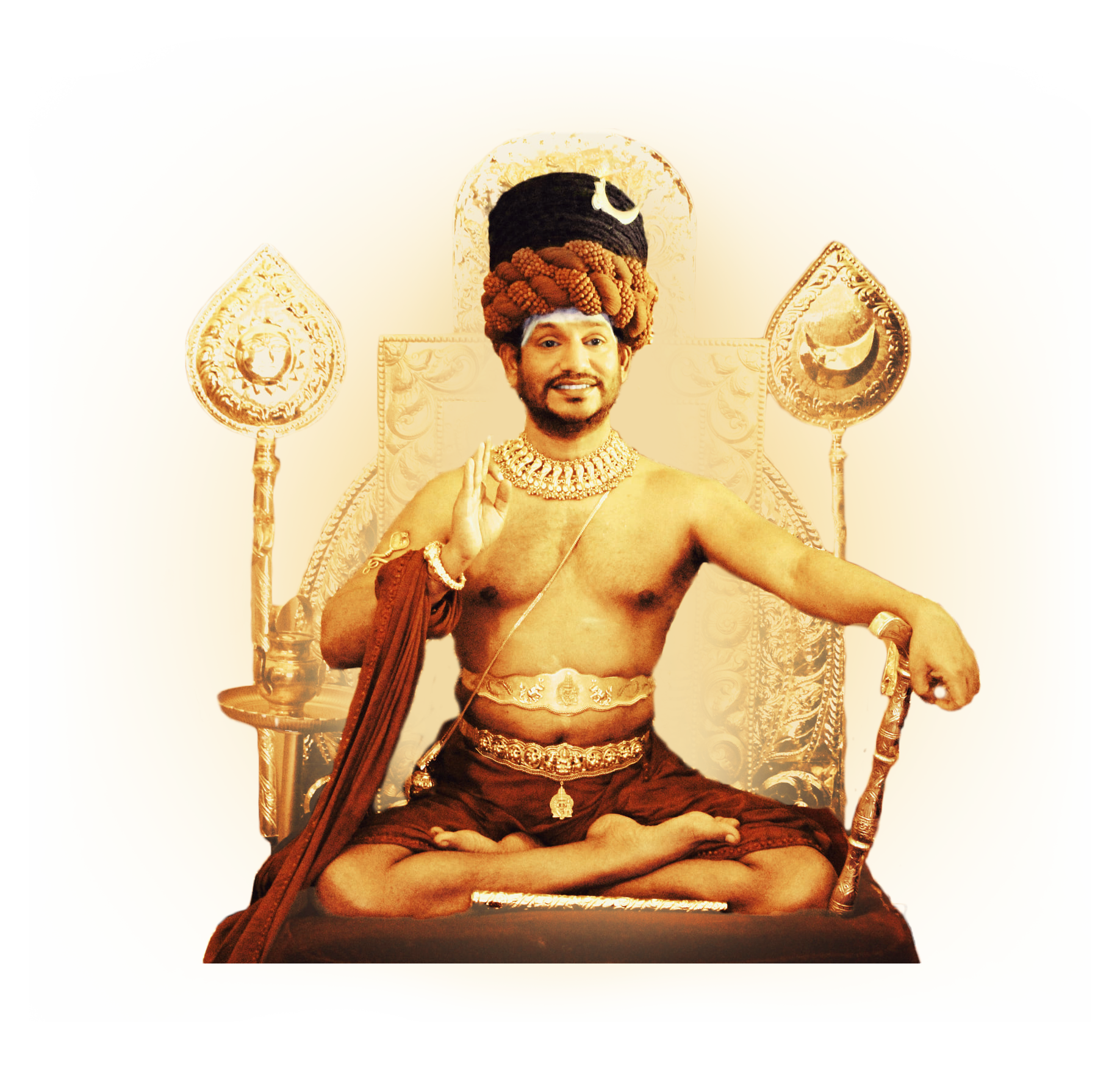 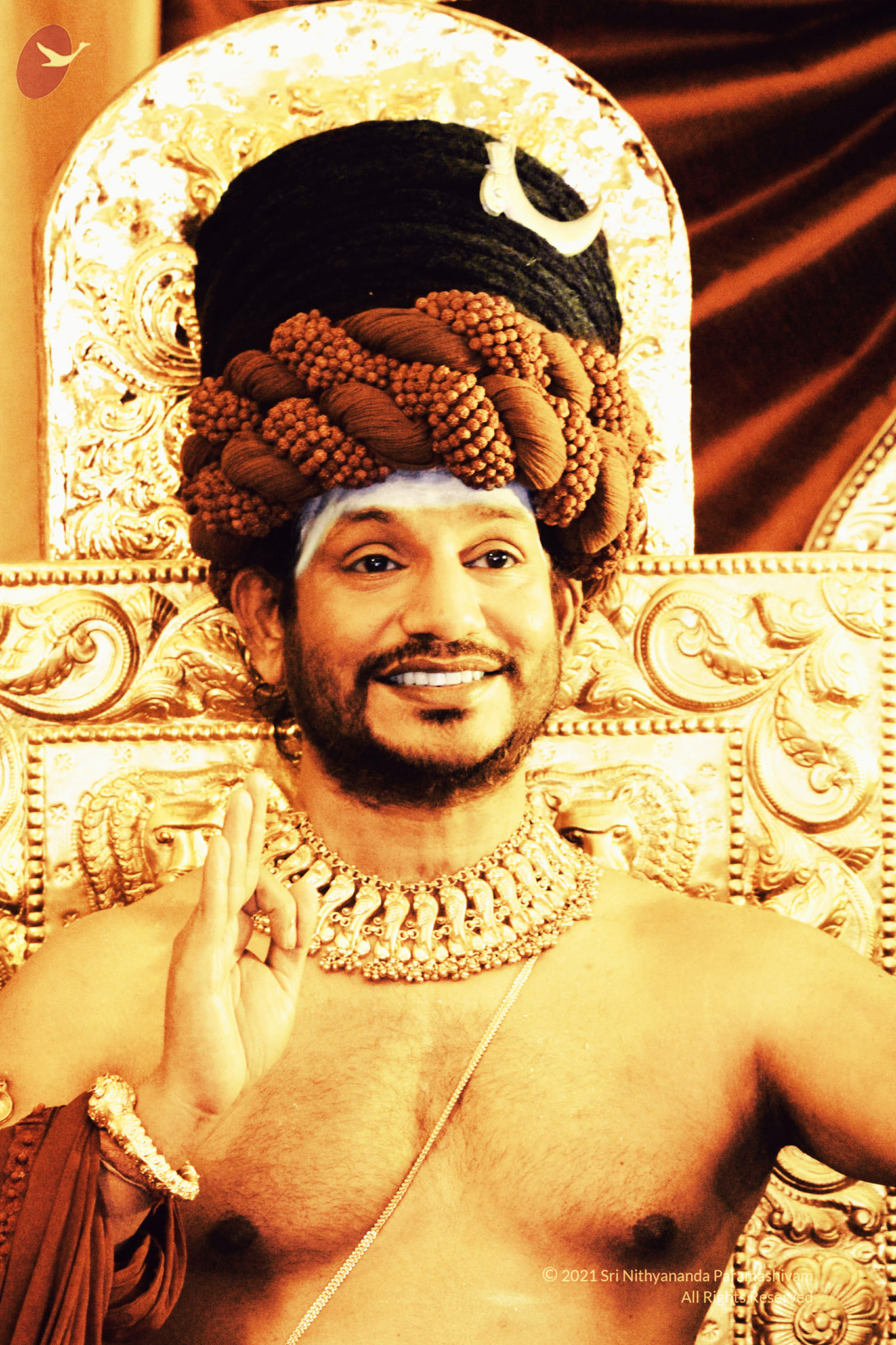 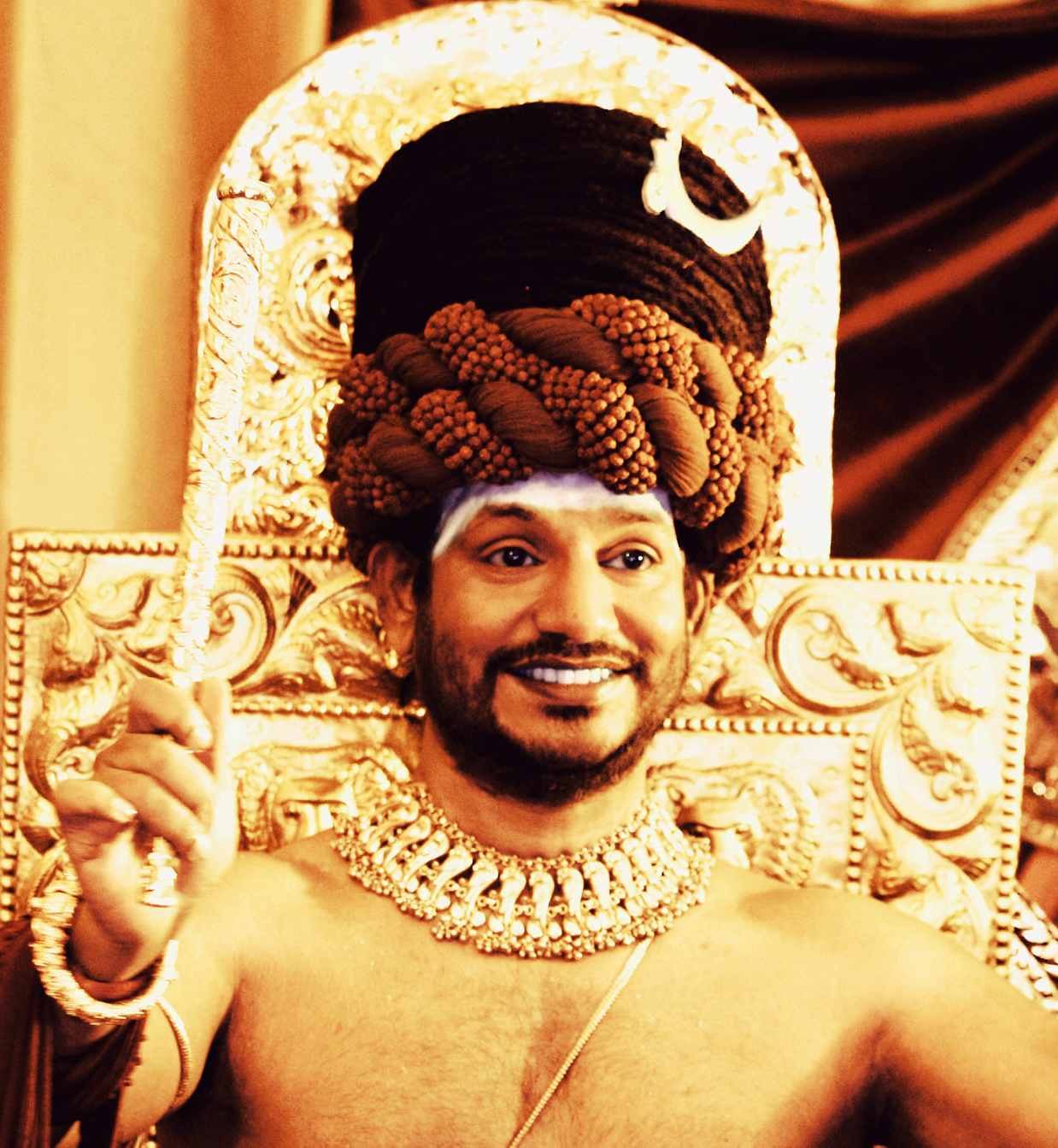 Vaidya means Physician, Eeshwara or Natha means God / Master. Bhagavan Vaideeswara is worshipped as the Master Physician, as the ultimate Cosmic healer who can cure even the incurable afflictions of worldly existence.

‘Health’ in Hinduism is not just disease-less-ness, it is a state of positive, complete well-being-ness, wholly centered on the Self. ‘Swastha’ – the Sanskrit word for Health – means ‘Centered on Self’.  To feel bliss continuously inside us and to float with blissful lightness is what is called ‘Arogya’ or ‘good health’.

Bhagavan Vaideeswara awakens the innate natural bliss and healing potential (Kundalini Shakti) dormant within every being and fills us with tremendous energy required to come back to the natural healthy state.

References from the Sastras on the Powers of Spiritual Healing

In Guru Gita (verse 93), Bhagavan Paramashiva says that Guru is the ultimate healer, the one who heals from the sufferings of worldly existence.

To Rudra, the Lord of Sacrifice, of hymns and balmy medicines, we pray for joy and  health and strength

To the strong Rudra bring we these our songs of praise, to Him the Lord of Heroes with the braided hair, That it be well with all our cattle and our men, that in this village all be healthy and well-fed.  – –RV1.114.01

haste bibhrad bheṣajā vāryāṇi śarma varma cchardir asmabhyaṃ yaṃsat || 5 ||
Him with the braided hair we call with reverence down, the wild−boar of the sky,  the red, the dazzling shape. May he, his hand filled full of sovran medicines, grant us protection, shelter, and a home secure. –RV1.114.05

O Rudra, with your most benignant means of healing, may I enjoy hundred winters – RV2.033.02

To you Rudra  I have surrendered myself, just as a boy  approaches  his respected father . The Lord of all existence, I beseech you ! Please bestow upon us the cure to our ills  – RV2.033.12

He through his lordship thinks on beings of the earth, on heavenly beings through his high imperial sway.

Come willingly to our doors that gladly welcome thee, O Rudra, and heal all sickness in our family  – RV7.046.02

I always bow to Guru, who is bliss, who exudes delight, and who is cheerful. His very nature is knowledge, and he is aware of his own Self. He is highest among the yogis and is adorable. He is the physician for the disease of worldly existence. 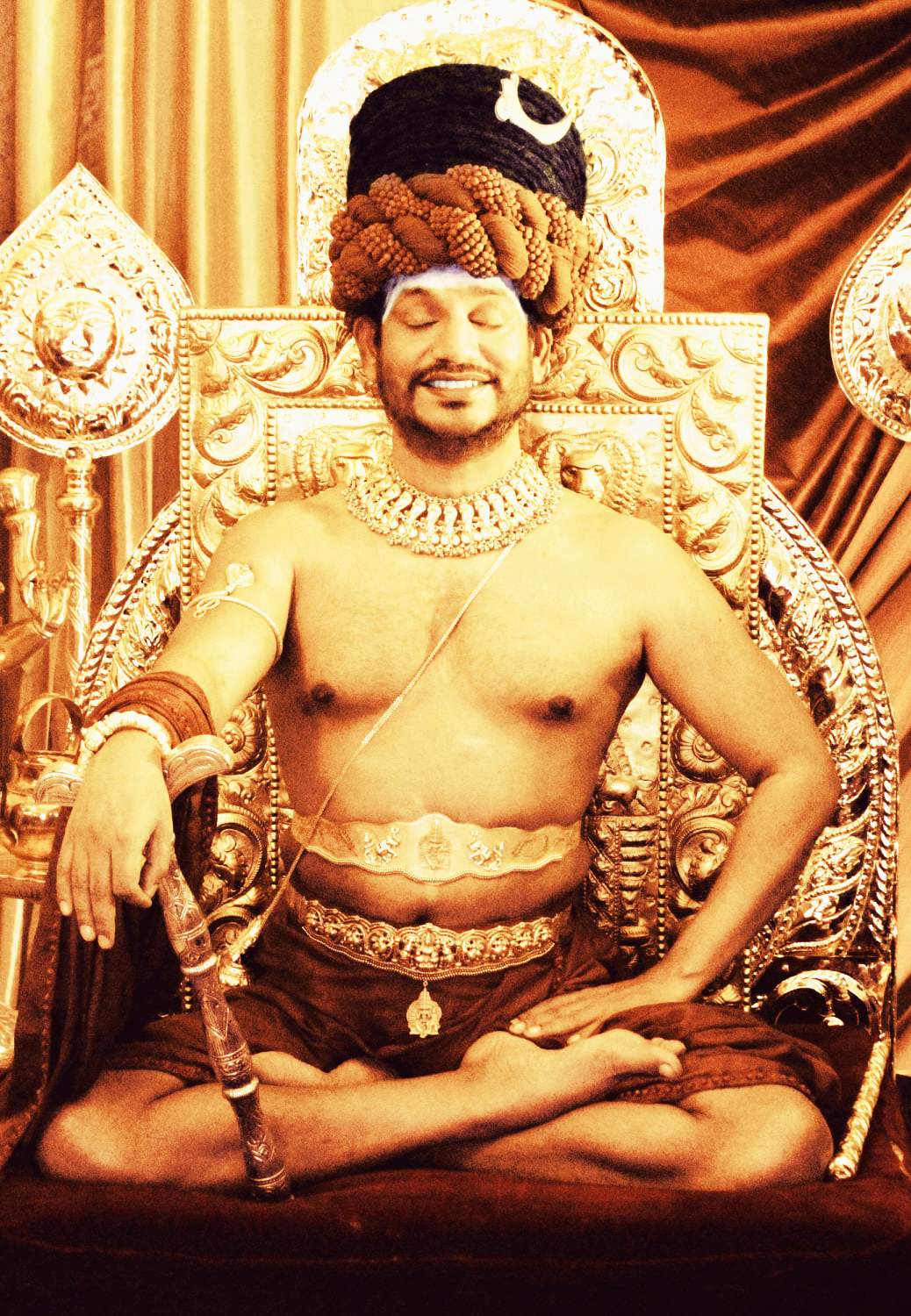 The ‘Sthala Purana’ (Historical Significance and anecdotes of location) of Vaitheeswaran Koil (temple) in Tamil Nadu says:
It is here that Paramashiva along with his consort Parvathi (known by the names of ‘ThayilNayagi’ and ‘Balambikesa’ ) heals the wounds of all the Devas (inflicted in the war with the Asuras) with the application of medicinal oils brought from Kailasa.

It is in this very place that Bhagavan Sri Rama worships Vaitheeswara and heals the wounds inflicted on Jatayu by Ravana and liberates him (Jatayu Kund).

It is by the worship of Vaitheeswara in this place that Angaraka (planet Mars) is healed of his leprosy.

In this very place, the Sun, the Moon, Angaraka (Mangal Graha), Indra, the Devas, the Vedas, the Saptarshis, Dhanvantri, Bhagavan Ganesha and Bhagavan Subramanya (as Sri Selva Muthukumaraswamy), Siddhars and Nayanars – all of them continue to grace this land and worship Paramashiva here as Vaitheeswara, the Master physician.

The sthala puranas of the various other Vaidyanatha Swamy temples across India are also replete with similar historical stories and testimonies of the power of healing and remedy experienced by devotees of Bhagavan Vaideeswara.

I salute that God Shiva, Who is the king among physicians, Who cures all great diseases like rheumatism and arthritis, Who is saluted by great sages,and to whom, the Sun god, Moon and God of fire are eyes.

I salute that God Shiva, Who is the king among physicians, Who blesses those beings who have lost their speech, hearing, sight and ability to walk, With these abilities and who provides cure for devastating diseases like leprosy.

Those who recite this prayer thrice a day with devotion and pray to the Lord Vaidyanatha, the One who is with his consort Balambika and who removes the worldly fear of birth and death, would get cured of all great illnesses.

How to receive the most in Bhava Samadhi Darshan

If you are already connected to The Supreme Pontiff of Hinduism as your Guru, gratitude towards the Guru during Bhava Samadhi Darshan is by mere remembrance!

If you are yet to be connected, worry not! With immense gratitude in that moment for everything in life, gratitude towards Paramashiva and the living incarnation of Paramashiva will be an added gift to your basket! Gratitude for the Guru is indeed blessing of janmas all together.

In Hinduism, a sacred meal (Naivedyam) is a personal offering of every individual with their chosen deity (Ishta Devata). Devotees are encouraged to personally prepare organic sattvic vegetarian food items and offered to Bhagavan Vaideeshwara manifesting through The Supreme Pontiff of Hinduism, Jagatguru Mahasannidhanam, His Divine Holiness Bhagavan Nithyananda Paramashivam.

Darshan is superconscious atomic energy exploding at that time of Darshan. Auspiciousness in health mentally and physically, completion with karma related to wealth, abundance, prosperity, healing and fulfilling relationships are a natural by-product in the life of one who has received Darshan of the living incarnation of Paramashiva.

At the time of Darshan, the food offered as Naivedyam becomes sacred consecrated food known as Prasadam. Hindu temples around the world are known for distributing only Prasadam as part of their food bank, not because of moral value, but the immense healing properties in the Prasadam which will do collective good to mankind of the society, city and country who is consuming the Prasadam.

Therefore, SHRIKAILASA Uniting Nations for Nutritious Food and Hunger-Free World, in collaboration with SHRIKAILASA Uniting Nations for Ancient Sciences invite and encourage you to be part of KAILASA’s Nithyananda Annalaya (Food Bank) by sharing the Prasadam offered to Bhagavan Vaideeswara today to people in your area. On behalf of KAILASA’s Department of Human Services, we thank you in advance for your contribution. We request you to please kindly fill this form (http://tiny.cc/fooddonation) which would enable us to mark your contribution as part of KAILASA’s History. 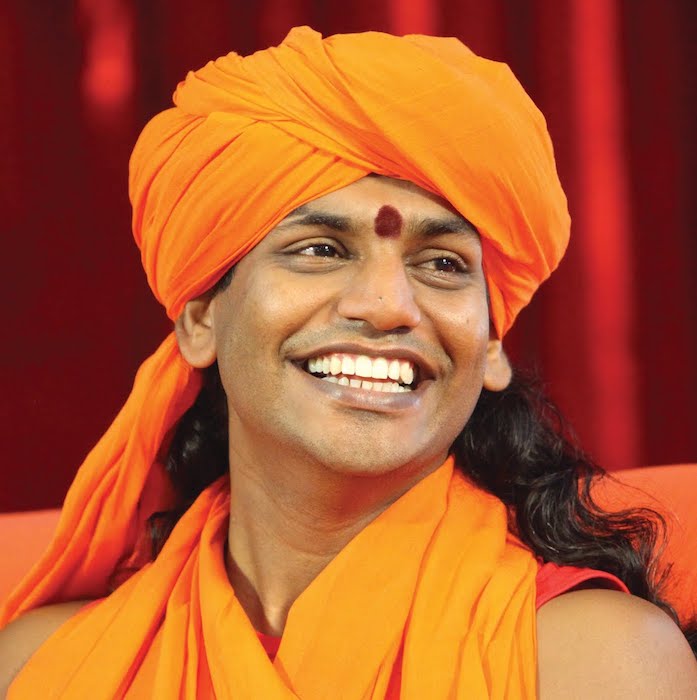 His Divine Holiness Bhagavan Sri Nithyananda Paramashivam (HDH) is the reviver of KAILASA – the ancient enlightened civilization, the great cosmic borderless Hindu nation. HDH is an Avatar from, and is a Supreme Pontiff of Hinduism. HDH has made science of power manifestation, yoga and temple based universities for humanity. SOVEREIGN ORDER OF KAILASA led by HDH and NITHYANANDA ORDER of monks, nuns and Hindu diaspora are working for global peace and to give super conscious breakthrough to humanity. NITHYANANDA HINDU UNIVERSITY (World’s largest) with extended campuses in 150 countries is collecting, organising, preserving, time capsuling, decoding, spreading and reviving 20 Million source books of Hinduism and the 64 sacred arts and sciences like Ayurveda, music, dance, sculpting, astrology, vastu. HDH is the 293rd Guru Maha Sannidanam of Shyamalapeeta Sarvajnapeetham (ancient apex body of Hinduism) and present Emperor of Suryavamsa Surangi Samrajyam. HDH has survived the worst persecution of multiple assassination attempts on person and character by anti-hindu elements.

Participants of the Bhava Samadhi Darshanˢᵐ (Program) understand that all blessings, instructions, initiations, teachings and suggestions made as part of any Program described above are purely in a spiritual capacity and are not intended to be any sort of guarantee or definitive statement about the past, present, or the future or any sort of medical advice.

Statements on this website or associated material  have not been evaluated by the Food Safety and Standards Authority of India, the U.S. Food and Drug Administration nor any other equivalent government health agency. These statements and the products/services of Kailasa’s NHU India (NDT) are not intended to diagnose, treat, cure or prevent any disease. Please consult your physician before implementing any new diet, exercise and dietary supplement programs, especially if you have pre-existing medical conditions or are taking prescribed medications. These statements are for educational purposes only and are not meant to replace the advice of your physician or healthcare provider.

Results are not guaranteed and individual results may vary.

Participants understand that in connection with any Program described above, KAILASA’s NHU, co-collaborators their teachers, organizers, volunteers, promoters and any representative or agent involved with any or all of the Programs described above do not make any claims, promises, or guarantees about the individual or group outcome of any or all of the Programs or their related services.
All events are subject to change. In the event of a change, we will make every effort to contact registered participants. We must reserve the right to make any changes whatsoever in the event owing to any unforeseen or unavoidable cause; or to cancel the event for any reason beyond our control without notice and without being liable to pay any participant compensation for damages or losses.