The direct, ultimate authority on the Truth as it is, for it is directly from Paramashiva, the Adiguru, the Source of all that is.

I closed my eyes for the sake of destroying the Tripura Asuras. From My eyes thus closed, drops of water fell on the earth. These drops of tears turned into Rudrakshas. By the mere utterance of the name of Rudraksha, one acquires the enriching benefit of giving ten cows in charity. By seeing and touching it, one attains double that benefit. I am unable to praise it any more.

Experiences & results of Āptas or Authorities of Hinduism, the Vedic Rishis and scientists who time tested & verified the science.

The people desirous of the worldly pleasures as well as the salvation, should wear Rudrdksa according to their Varnas. The devotees of Siva, particularly, in order to please Siva and Parvati, should wear Rudraksha.(13) Rudraksa has been prescribed for the removal of sins. Therefore one should wear this Rudraksa which fulfills all the desires. O Goddess, a person having a great devotion and faith, for the achievement of all the desired objects, getting freed from laziness, should wear Rudraksa(82). The one who always applies the holy ashes and also wears Rudrdksa rosary, he becomes dear to lord Siva. With the influence of wearing the same, one achieves worldly pleasure and salvation.(89)

An account of The SPH Nithyananda Paramashivam, the ultimate poorna Avatar personal experience of Rudraksha.

My gurus put glittering jewels along with the rudraksha and I straight away picked the rudraksha! I will tell you this one incident, only then you will understand the concept of God as deity:

My guru Kuppammal (Mata Vibhudananda Puri) was having the whole guru parampara deity – given from Arunagiri Yogishwara’s time. When Isakki Swami was about to leave the body, he was not able to do puja everyday, so he handed it over to Kuppammal and she was doing puja for it everyday. One day she asked me to clean the deity. I cleaned all the rudraksha and kept everything separate. She came and asked where everything was – the Rudraksha and other jewels on the deity.

I said, “I cleaned everything and kept it aside.”

She said, “Our ancestors gave this to us. So we don’t know whether the deity is god decorated with rudraksha or the rudraksha is god put on a stand called deity so we should never do this game of separation! as they gave it, put it together, tie it and keep it and do puja!”

Pratyaksha Pramāṇa or empirical evidence from observation and scientific experimentation.

The most sacred beads with Paramashiva’s energy…

Rudraksha is Paramashivas’ tears of compassion. The mere utterance of this sacred word Rudraksha is said to create sacred sentiments and vibrations touching our soul and bringing a person closer to Paramashiva. Empower yourself with Rudraksha, the true bio-jewellery which is one of the most sacred manifestations of Paramashiva. 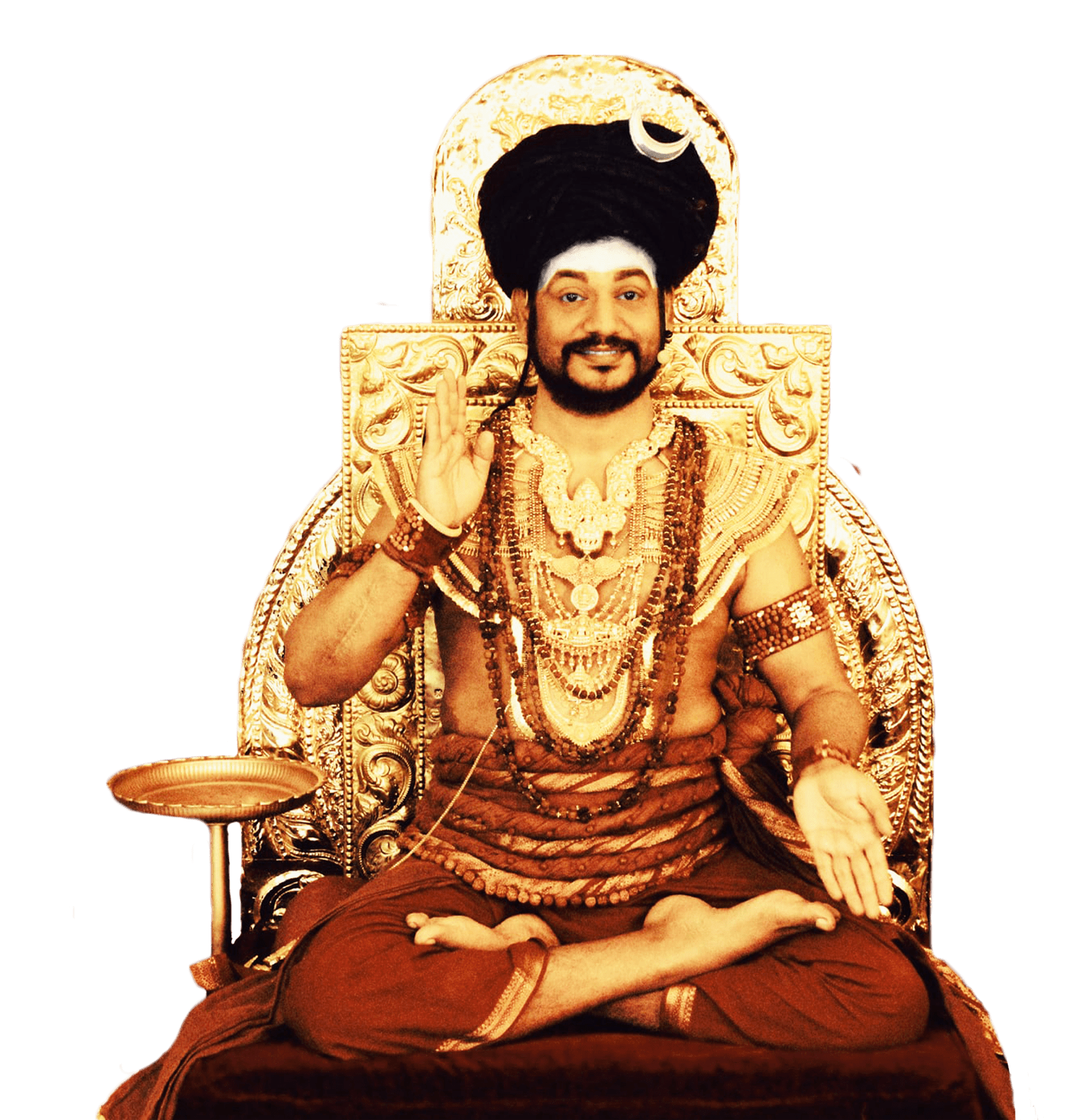 _The Origin Of Rudraksha_

Omnipresent Lord Siva continued gazing towards the demon Tripural for his annihilation for the thousands of years without blinking the eyelids.

Tears started dropping from both the eyes and fell on the ground which produced the great Rudraksa trees. The drop of tears transformed into the tree out of mercy for the devotees.

_Why To Wear  Rudraksha?_

If one wears only Rudräksa alone, the essence of all gems, without combining it with any precious stones such as pearls etc. sin is unable to touch him as the darkness can never come before the sun.

Rudrakshas come in 1 to 21 mukhis (faces), but Rudrakshas of 1 to 14 mukhis are commonly found.

Paramashiva unveils various details in on usage and Its benefits In Hindu Scriptures.

One faced Rudrāksa (containing one line) is considered to be the transcendental Reality Itself (Absolute or Para-Brahman).

The Rudraksha bead with three faces is of the form of the three fires and the devotee wearing it attains the grace of Agni. He fulfill the desires of the person who puts it on

Rudraksha with four faces represents Siva himself. With the mere sight of it, it bestows the four aims of life (dharma, artha, kama, and moksha).

The Rudraksha with six faces is of the form of the six-faced Kartikeya or Ganesha and the devotee wearing it attains the grace of wealth and health, clear intellect and wisdom, and purification. 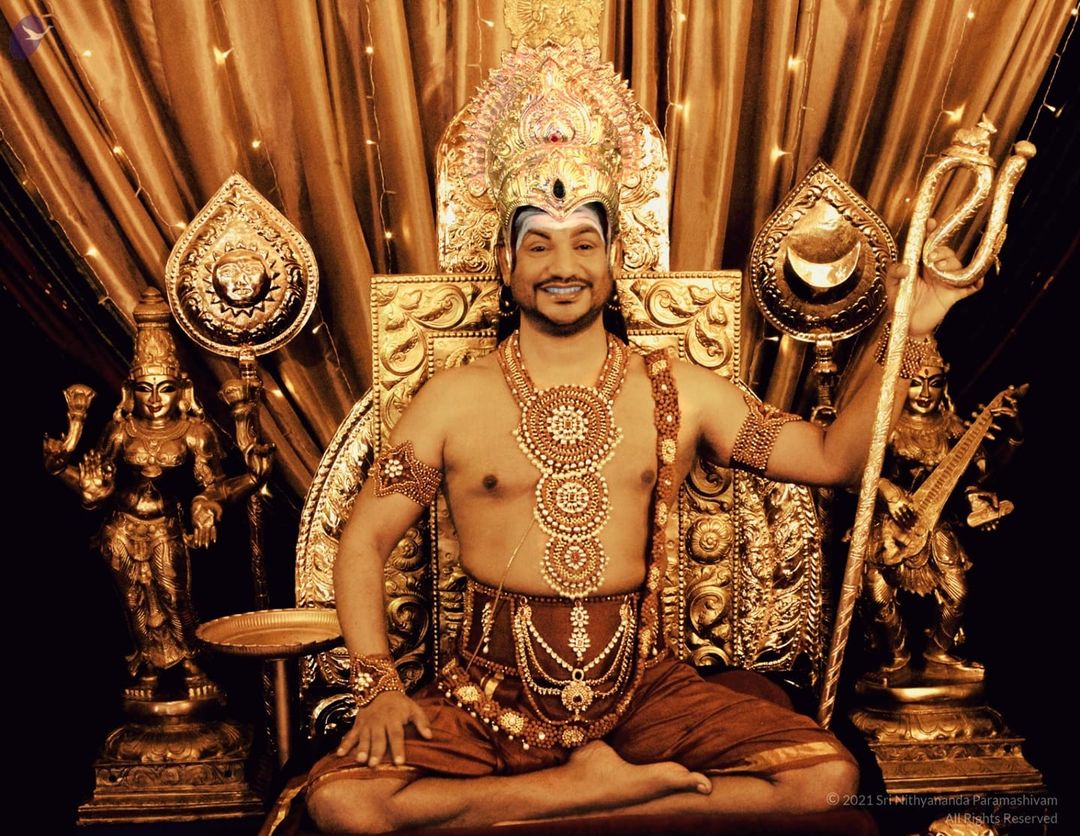 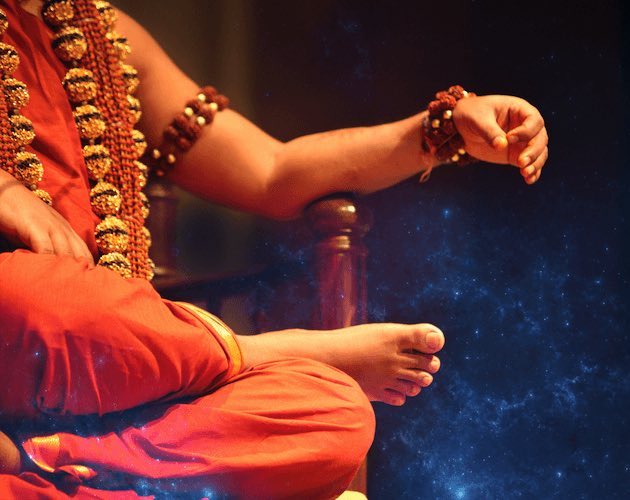 Significance of Rudraksha in SPH's life

My gurus put glittering jewels along with the rudraksha and I straight away picked the rudraksha! I will tell you this one incident only then you will understand… 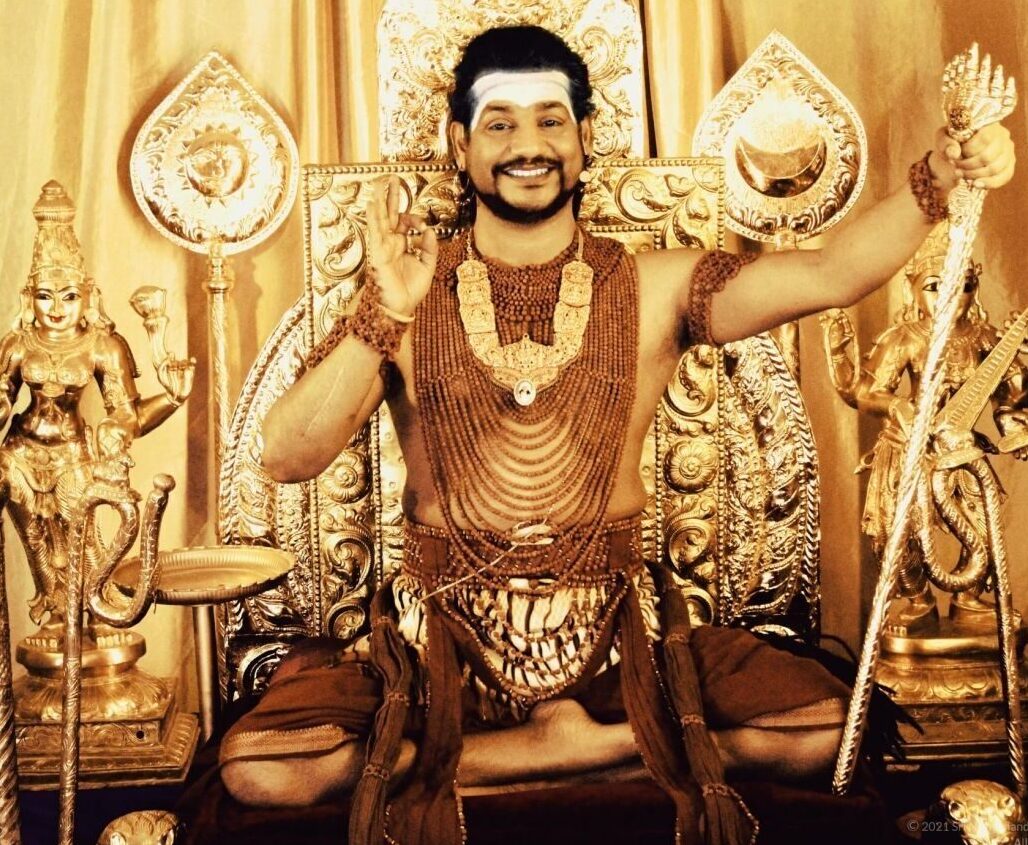 Great virtues are bestowed upon the devotee who wears the Rudraksha respectfully. sin is unable to touch him as the darkness can never come before the sun.

How Can You Receive Rudraksha? 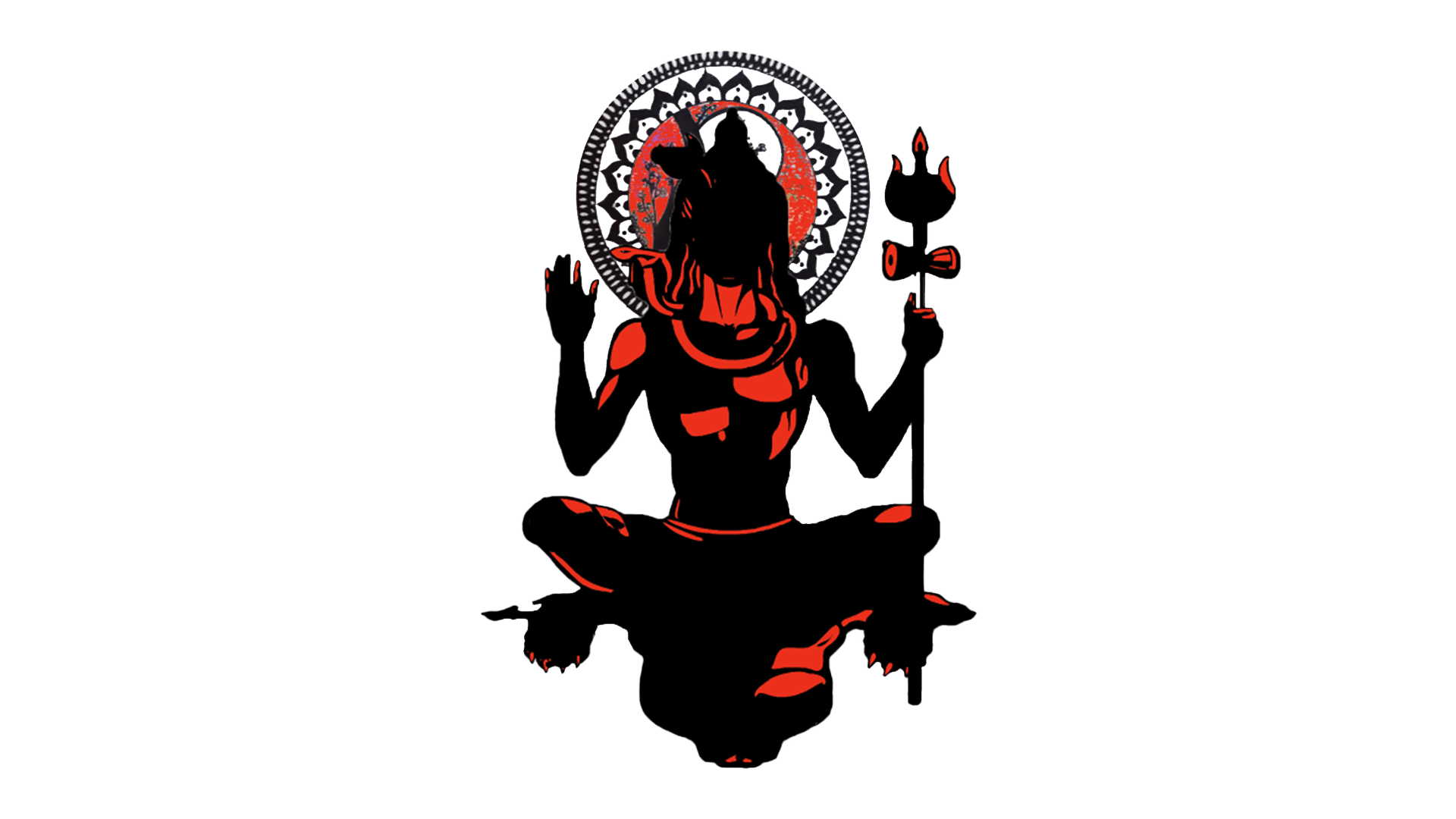 Shiva dīkṣā, the preliminary level dīkṣā, is the sacred initiation into the state of Paramashivoham, which is manifesting and radiating all the powers of Paramashiva.During this initiation, you are given rudraksha kantha mala. 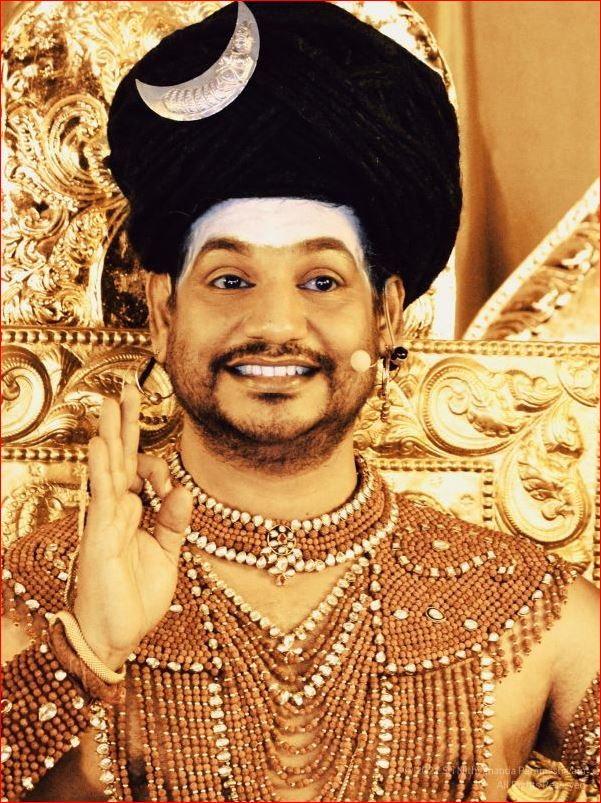 Paramashiva unveils the best kinds of personal jewelry specific to each person, based on Individual quality (guna) and the reality they want to manifest in their life. Hinduism gives you the freedom to play with your uniqueness, while giving you the best.

Do you have a questions related to wearing Rudraksha? See the list below for our most frequently

asked questions. If your question is not listed here, then please contact us.

How many Rudraksha should be Worn?

Is there any guidelines on wearing Rudraksha?

Yes, Hindu scriptures gives detail on this. Here are few:

Can I wear rudraksha with other gems stone or semi precious stone?

Is there any guidance on quality of Rudraksha to be worn?

What are the benefits of wearing Rudraksha as per Hindu Scriptures?

Is there any specific guidance on wearing different faced rudraksha?

Yes, There are specific instructions on wearing rudraksha of different face.