The story of how river Ganga came to Earth 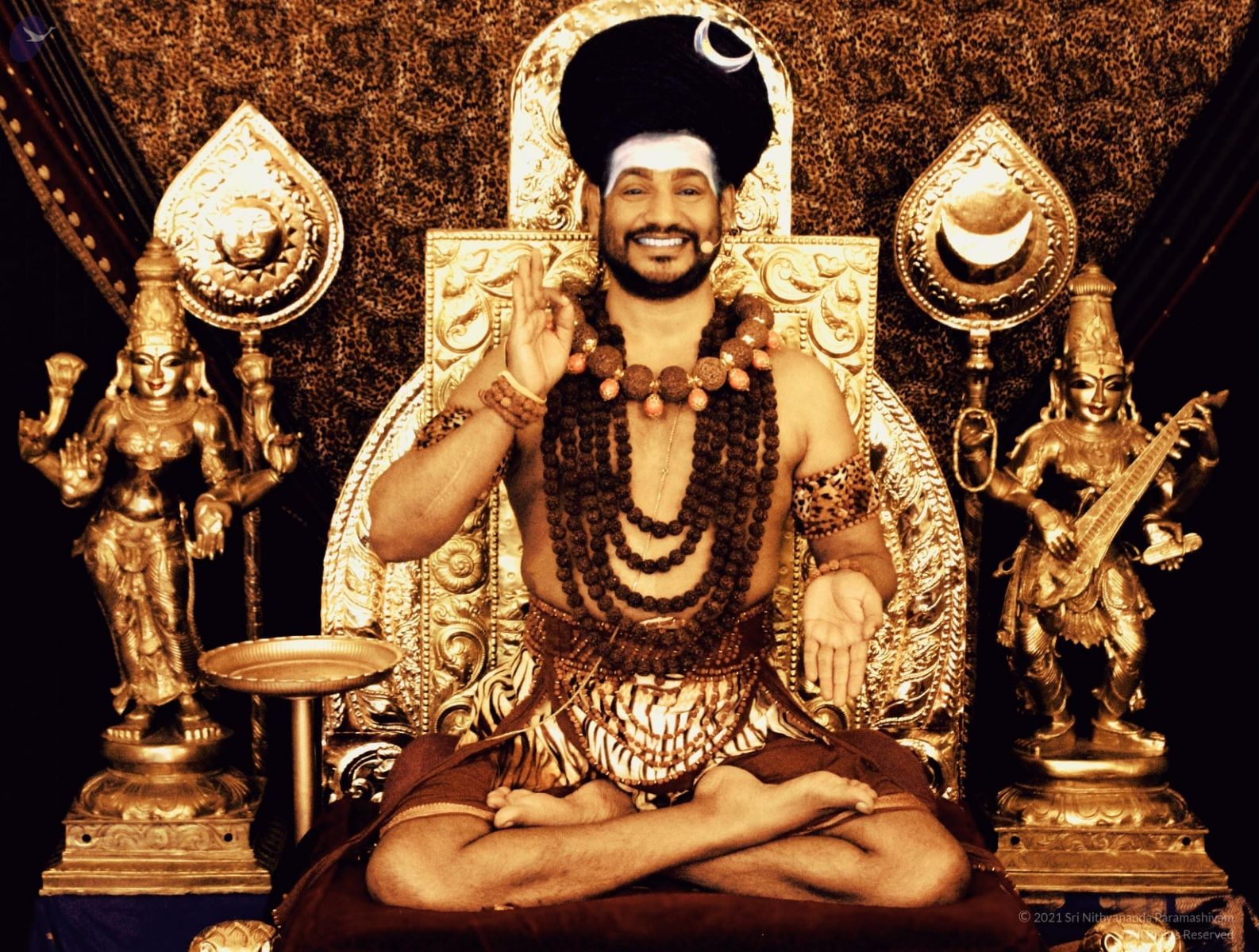 The river Ganga is the holiest river in India, possibly in the world. One famous king is responsible for giving us humans this treasure. This river used to flow in the heavens, but this king was able to bring the river Ganga down to Earth. His name was Bhagiratha. He was from the Suryavansha dynasty, and thus ruled over Kosala Kingdom with his capital at Ayodhya. He was the son of King Dilipa I. Bhagiratha was able to bring down the river Ganga and liberate his ancestors, a task that had been passed for five generations.

It took years for Bhagiratha to achieve what he wanted, but a valuable gift from Devi Parashakti opens a path for us all….The path of liberation of the pitrus.

River Ganga is considered as a river which is there in the higher lokas. It was there with the kamandalu of Brahma; means, this is the energy, this is the water energy of the Existence. Brahma means a Creator, the energy which creates the whole Existence. If you see Brahma, you can see four things with Him, one is the kamandalu – means the water energy, another one is the palm leaves – Veda, knowledge, wisdom and aksha mala – means japamala. Aksha mala represents the vibrations, sounds. Then the swan will be there – hamsa vahana. The swan – hamsa represents continuous meditation. Ganga is the water energy of Brahma. She was there in His kamandalu.

For some reason, Bhagiratha’s forefathers (pitrus) had been cursed by some Rishi and they all died; they had been burnt, reduced to ashes. All their ghosts were living in pitru loka, struggling, suffering. They were not liberated. So, they beg King Bhagiratha to help in some way. The king decides, “I have to do something to liberate them.” Bhisma-Parva Chapter 6 Verse 4 of the Mahabharata mentions that King Bhagiratha started meditating, doing penance, doing Tapasya towards Lord Brahma.

Bhagavan Brahma appears and gives darshan and he says – “Yes, I can send the River Ganga to the planet Earth. No problem. But be very clear – can planet Earth hold River Ganga’s speed? First, do something about that. Arrange for it. Then I will send the Ganga.”

Then, again King Bhagiratha starts doing penance, doing tapasya. After the tapasya, Bhagavan Paramashiva appears. Then King Bhagiratha explains “Now Lord Brahma accepts to send the River Ganga to planet Earth. But He says the whole planet Earth will be washed away. Planet Earth cannot withstand the speed of Ganga. Please do something, You have to protect us, You have to take care of us.”

Now Lord Brahma appears and says, “I am ready to send. But devatas are not ready to depart with River Ganga. They like to take baths in Ganga every day. It is their life source. Ganga is not simple water. It is an energy. By bathing in that only every day they rejuvenate their body and mind.”

Then King Bhagiratha says, “Alright, I will arrange all the facilities for devatas to stay on the planet Earth. Just on the banks of River Ganga, I will create cities where all Gods and Goddesses can live and have baths every day and have their regular routine as they have in the other loka, as they have in the Brahma loka.”

Then King Bhagiratha comes and does tapasya towards Himachala, the Hima hills, Himaparvatha, the Himaraj. Himaraja appears and asks, “What do you want?”

King requests “I want you to be the host for Mother Ganga and the place where I can create a city for all the devatas. From you only Ganga can flow. Only you can be the base on which Ganga can flow towards the planet Earth. Himaraja says, “How can I host her? She is my daughter’s competitor.”

Then King Bhagiratha does tapas towards Devi Parvati. Mother appears and asks, “What do you want?” Then King says, “Ma, I wanted Ganga to come to the planet Earth. I wanted your father to be a host. But he says Ganga is your competitor, How can he host Ganga?”

Devi Parvati says, “Who said she is my competitor? I am She. She is me.” She says, “River Ganga is the feminine aspect of me. I am the Mother aspect of her.” Then she goes and tells Himaraja “Host Her.” And Himaraja accepts.

Then King Bhagiratha starts building the whole city throughout the route in which Ganga is supposed to travel. He meditates on every hill and takes permission. He prays to every hill. Every hill says “Yes, I will give the way for Ganga”. So, the whole route is cleared.

Then the King started meditating towards Lord Vishnu. And Bhagavan Vishnu appeared, “What do you want?” The king shares “I wanted the Ganga to come down to the planet Earth. Unless you agree, unless you give blessings it will not be possible. Please bless me.”

Bhagavan Vishnu says, “Alright I bless you. Ganga will come to the planet Earth. She will come just out of My feet.” Then He says a beautiful one more sentence“Whomsoever has realized the Vishnumaya, means the Universal Consciousness, whatever water comes out of their feet will be Ganga.” From this word only, the tradition of pada puja starts. Pada puja of Enlightened masters starts from this tradition.

Coming down of Ganga 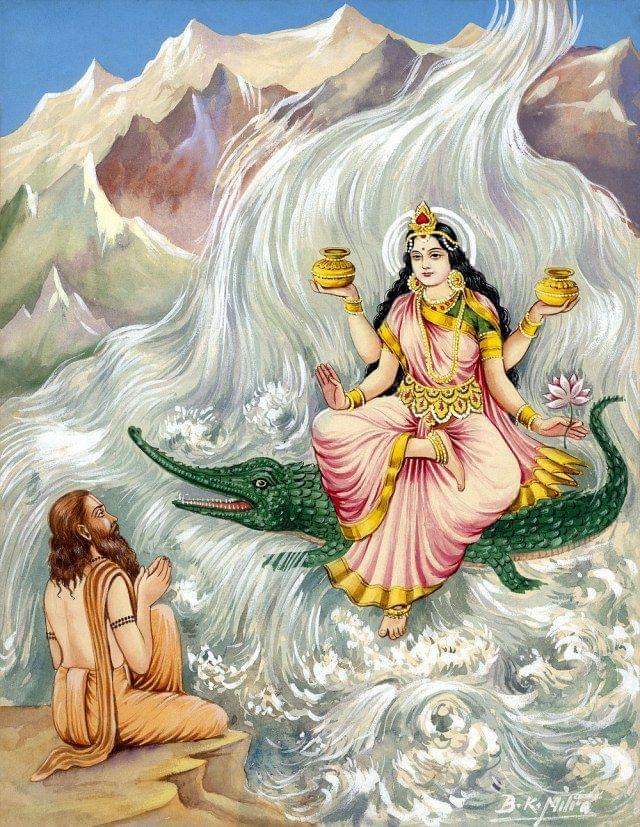 Then now the king again meditates towards Lord Brahma. Bhagavan Brahma appears with all His glory and compassion… blesses the Bhagiratha. Then he prays to Ganga Ma, then he does tapasya towards Ganga Ma, meditates and invites the Ganga Mother.

All the Devatas, all the Rishis, all the Munis, simply escaped from the planet Earth and ran away because they got frightened that pralaya is going to happen, which means the end of the world has come.

Such a power, they simply ran away from their world, they escaped. Now Parmashiva beautifully appears and puts his head in between the Ganga. She straight away lands into Shiva’s head, into the matted lock. The next thing she gets locked in the hair itself. She is blocked.

Again, he meditates towards Paramashiva, Paramashiva appears and says, “Yes, she’s there in my head. Now what do you want me to do?”

Bhagiratha says, “Please just send her a little bit. Don’t hold the whole thing.” Then Shiva says, “Oh, is it so. Alright, then just He moves one hair; just He does, only one hair moves and from that one hair gap just Ganga comes out and lands on the Himalayas.

Understanding from the dimension of Spiritual Enlightenment

Now we will understand the whole happening of Ganga from the dimension of a spiritual Enlightenment. Actually, the whole happening is a metaphysical expression of Bhagiratha’s Enlightenment. First thing, Bhagiratha is tortured by the past samskaras, engrams; that is the elders who are not liberated, still they are hanging around him. He is continuously tortured by the past samskaras, engrams.

So, King Bhagiratha does tapasya towards the creator of the whole Universe. He wants the knowledge, the energy to be flooded on him so that all the engrams will be washed away, all the engrams will be destroyed. And one more important thing, when Ganga came she washed all the ashes of Bhagiratha’s forefathers and liberated all of them and ultimately gave Enlightenment to Bhagiratha and She is here liberating people. 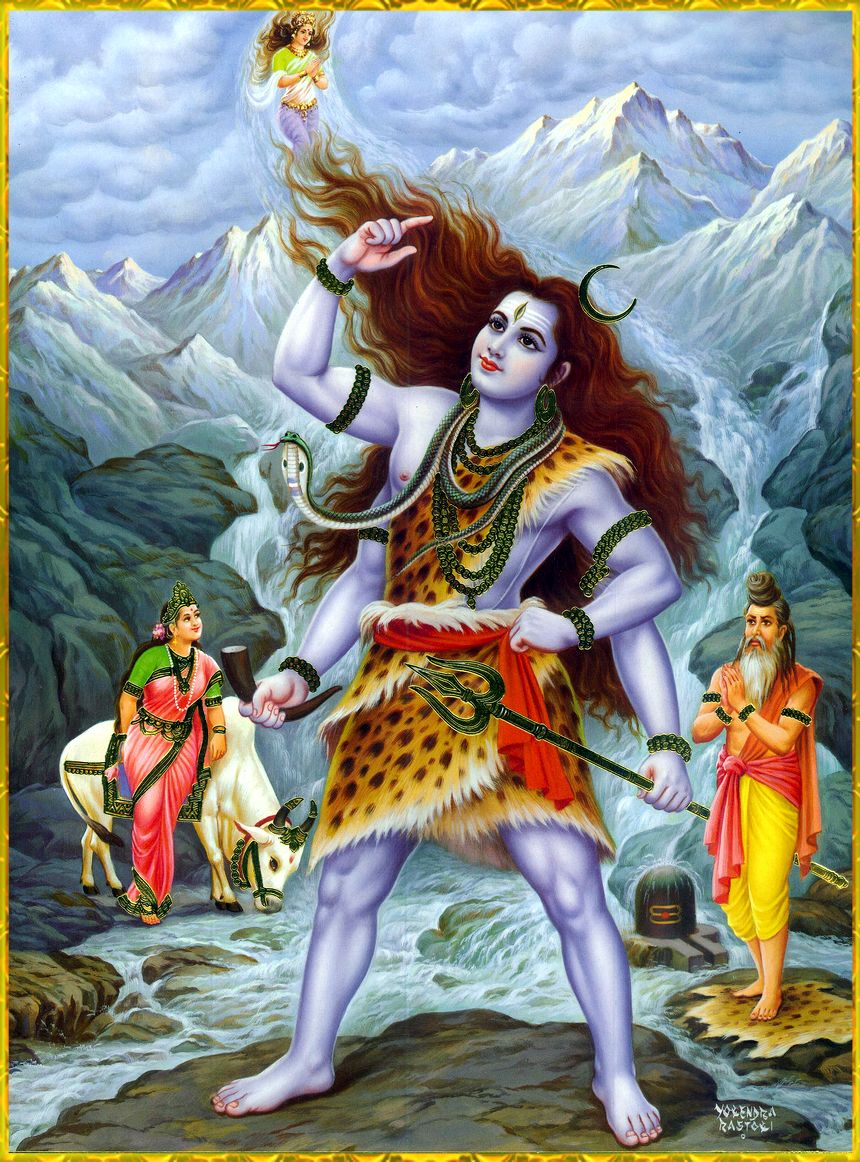